Apple presented a glimpse of iOS 12 and its features for the first time at WWDC 2018, among other software geeks.

For iOS 12, “Performance is the key”. iOS 12 updates shown wonderful home screen redesign and updated new futures to first-party apps like Mail, Camera, etc. Apple is preferably looking to make the iPhone faster and more responsive than it’s before. It’s doing that at WWDC, all the way back to the iPhone 5S.

Apple declared that iOS 12 will work with all the same devices that can already be running iOS 11. Apple mentioned that keyboards on the aging iPhone 6 Plus, for example, will fire up 50% faster than earlier, with the camera ready to snap 70% faster, app launching up to 40% faster, that showing Apple isn’t giving up on older devices. Share sheet and app loading, in general, is now twice as fast with iOS 12.

Apple presented the Measure app with AR to see the size of objects just by dragging a finger across them when your camera is pointed at them. Apple demonstrated sizing up a suitcase and a photograph for framing. 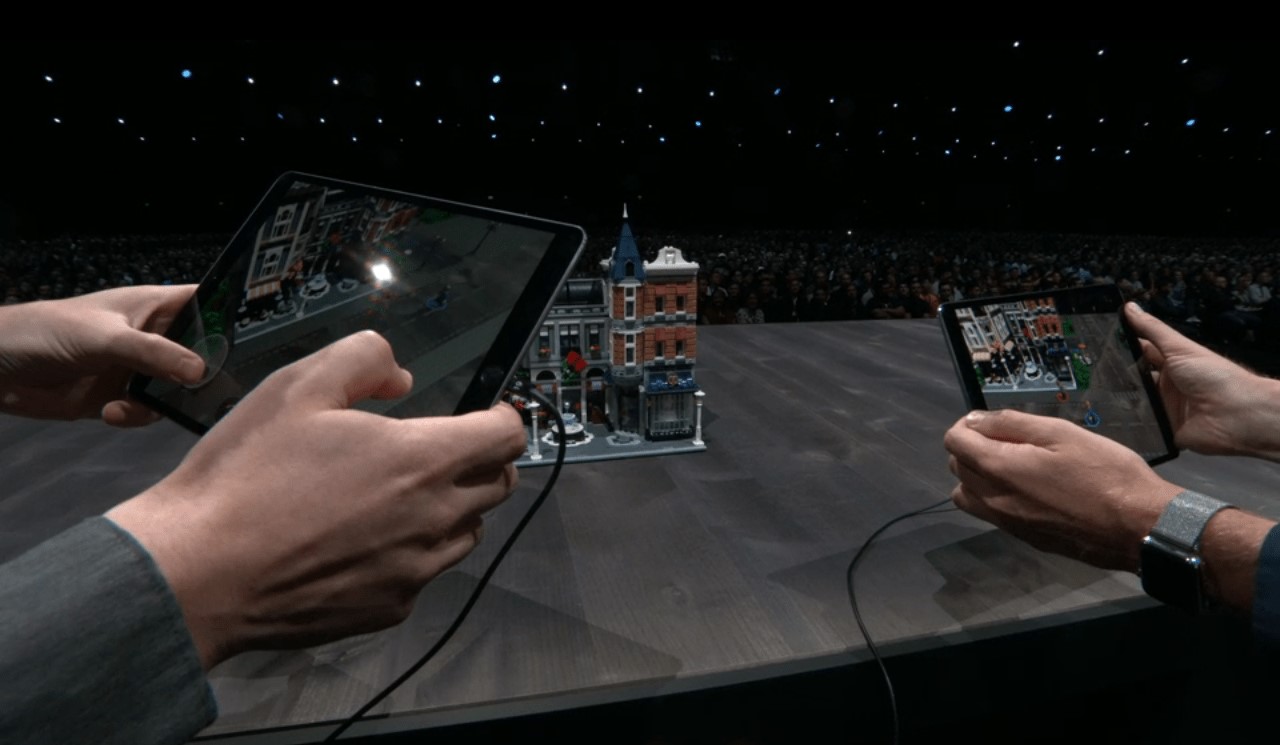 Brands like guitar makers Fender and Lego are also on board, with the toy giant showing off an effective demo that shows real sets appear on your tabletop. The Lego game demo, using two iPads, also took the support of ARKit 2.0’s multiplayer support options, with both players sending little Lego Minikit folk strolling around an augmented reality Lego town. Rolling into a Lego building would also let you see through Lego walls to see what the occupants within were up to. 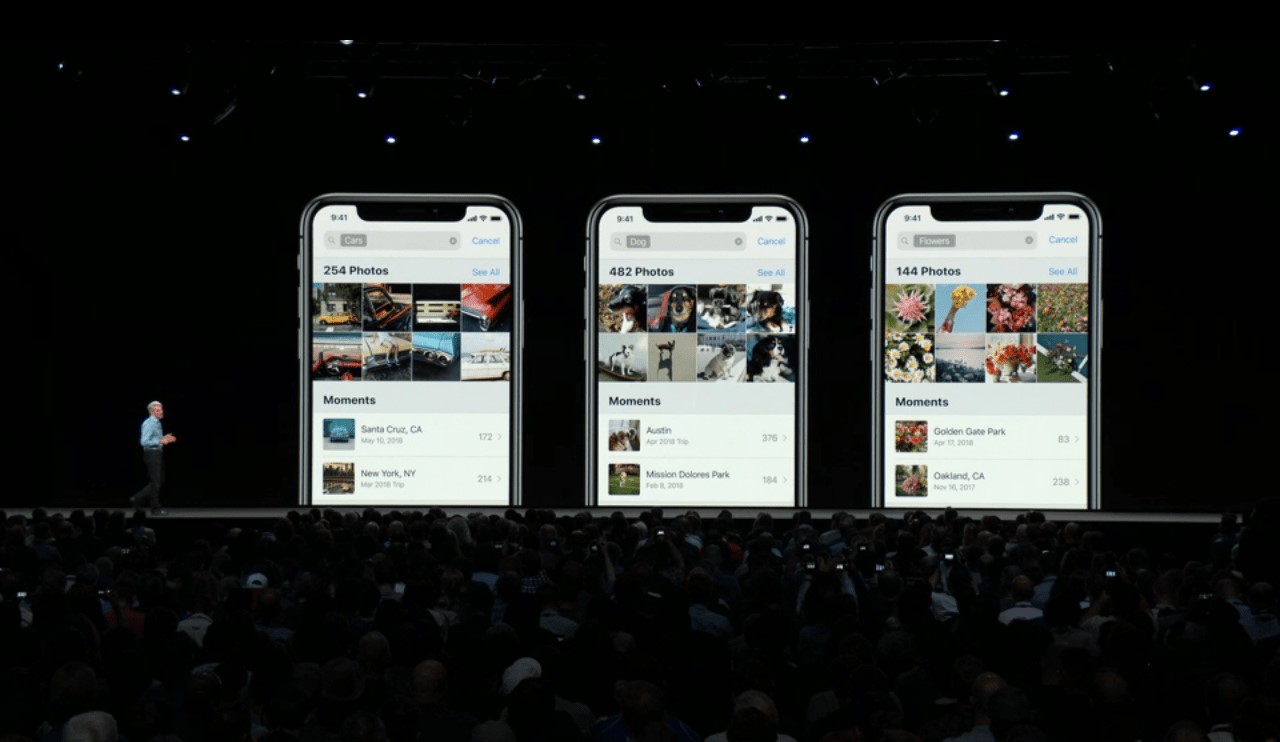 The Photos app got a smart update with a new intelligent search option. A ‘For You’ tab, making recommendations on what you can possibly do with the photos you have saved. Proposals can include anything from making a looped Live Photo, or use ML to recommend who’s in your photos so you can share them. This facial recognition feature will, however, rely on using the iCloud Photo Library, so you may have to boost your storage settings to take advantage.

Siri has extremely required an update, and it got one. A new feature, called ‘Shortcuts’, integrates with apps to develop bespoke voice commands. As they demonstrated that Tile Bluetooth tracker, letting you create a voice command like “find my keys” to activate the Tile app locator feature. 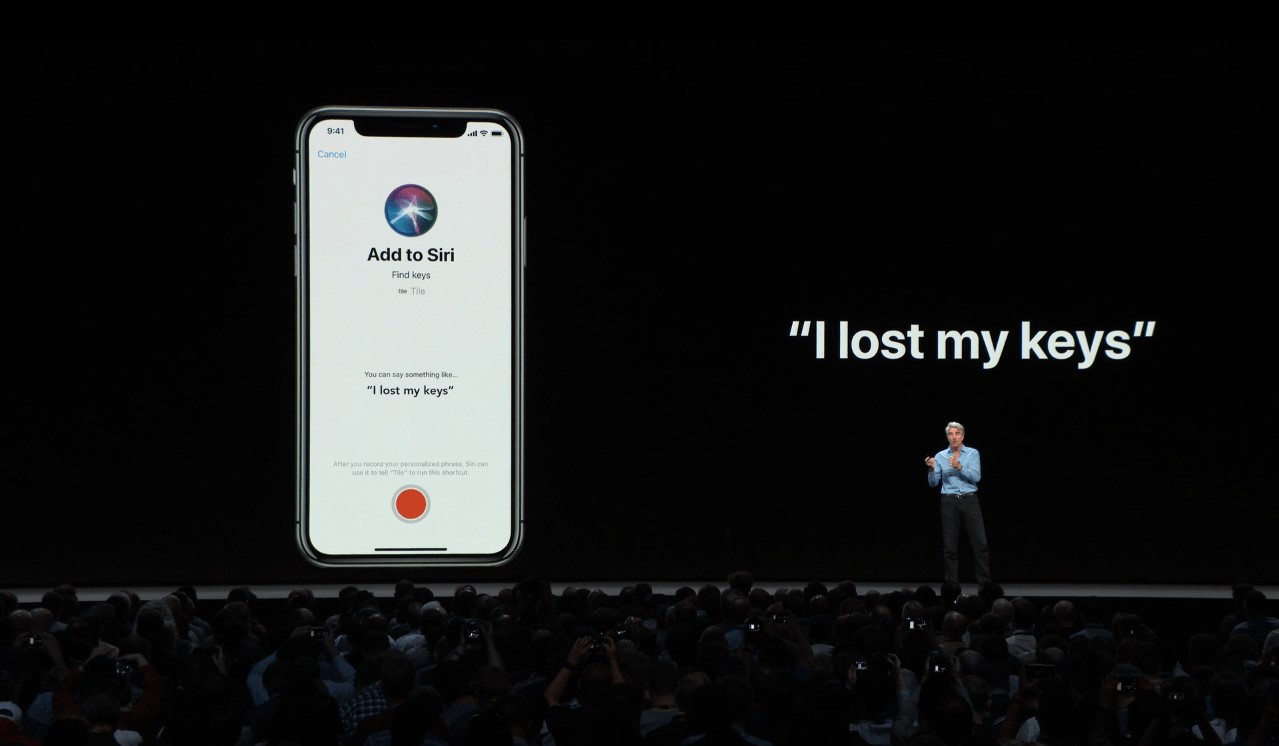 Apple presented ‘Add to Siri’ feature for third-party apps to trigger a series of commands with the voice assistant using custom commands – for the situation, setting up a routine that would both message a spouse and adjusts a connected thermostat when you tell Siri you’re “heading home”.

The new feature of Siri to the lock screen, also make suggestions for letting you know what’s in the vicinity, and will also give you prompts to inform associates if it appears you’re running late for a meeting. When it knows you’re in a cinema it can remind you to put your phone on silent.

From iOS 12 apple gives single application for stocks and news and it will be coming to iPad too, for all that big-screen stock action you’ve been craving all these years and to organize all your favorite news sources into one place.

Voice Memos are also coming to iPad, synced automatically over iCloud. Which is a bit better than big-screen stocks.

Do Not Disturb and Grouped Notifications 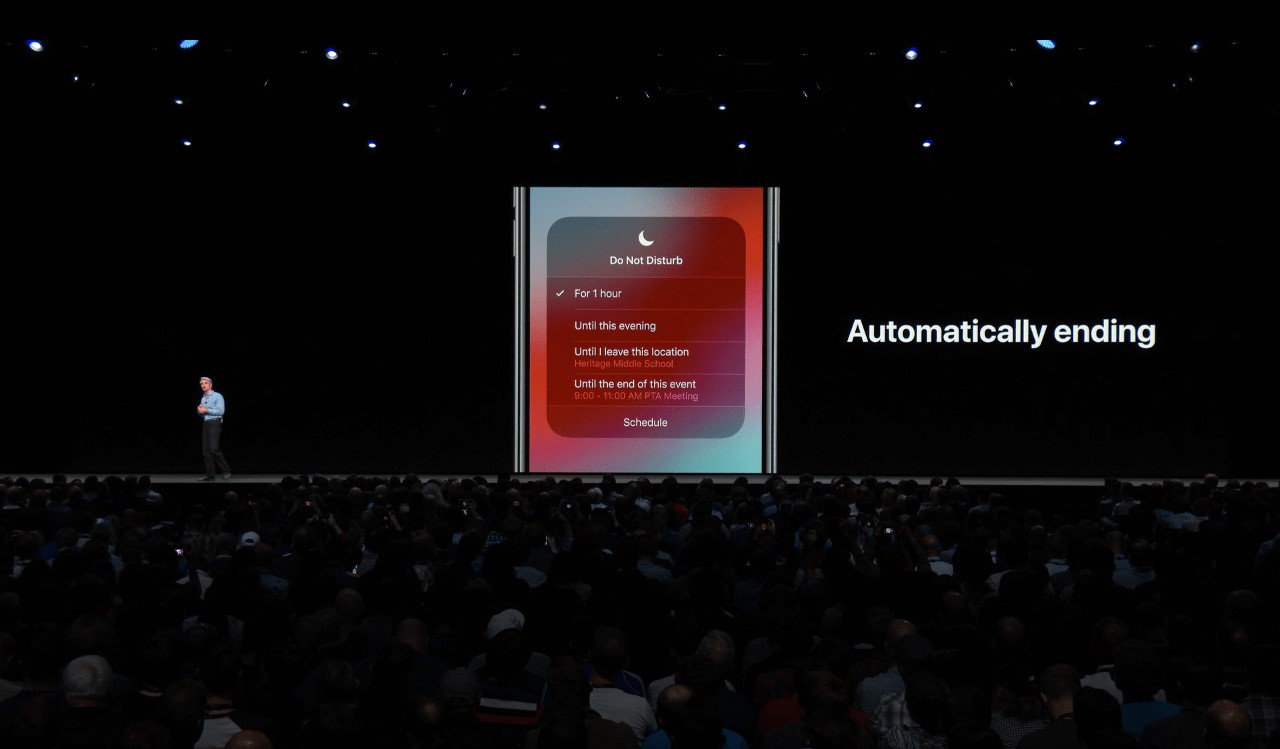 We’re all spending a little too much time on our connected devices, right? Apple thinks so too, so it’s expanding its Do Not Disturb features, such as grouped notifications, while you’ll get more choices for addressing notifications from the lock screen. This new feature like ‘timer’,  enables you to restrict screen time for your kids. 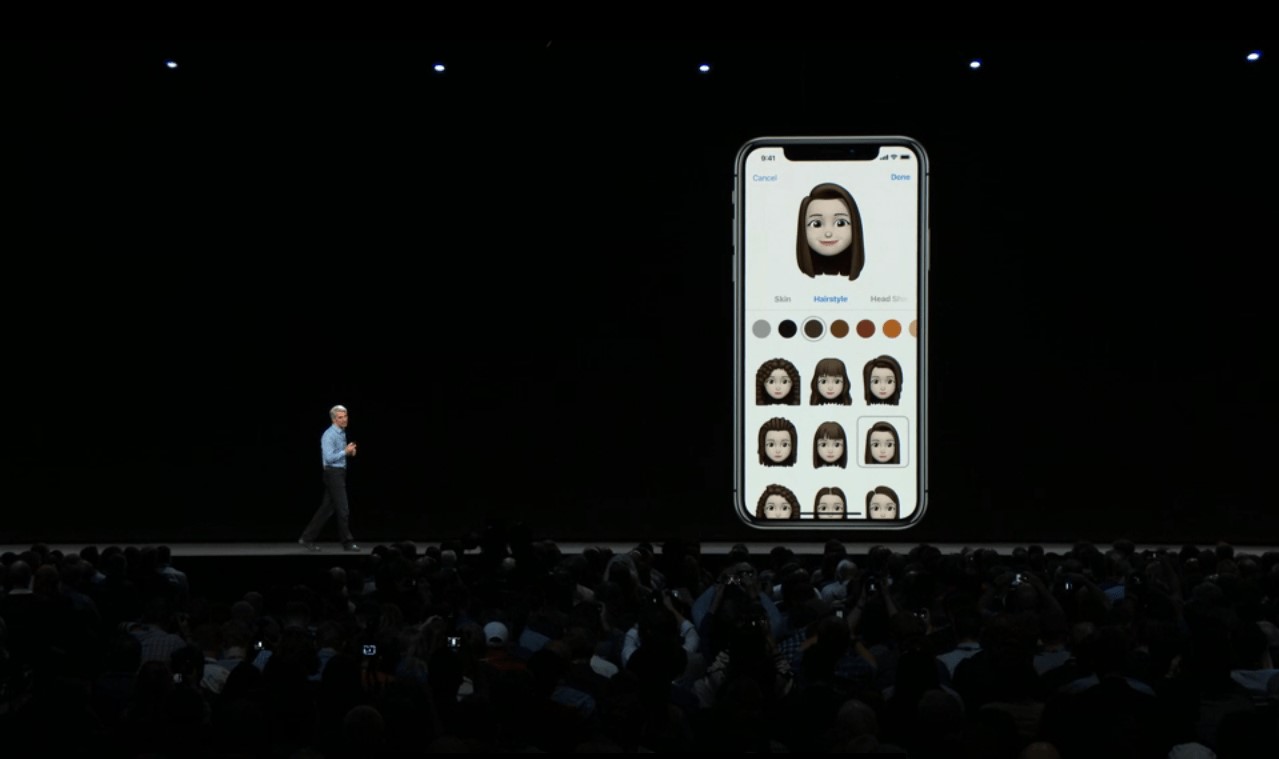 No one could have predicted the popularity of the beast-themed Animoji messaging option. But Apple’s going one step further with ‘Memoji’ – personalized, animated emoji that can be created to look like you (or, you can customize it the way you want). 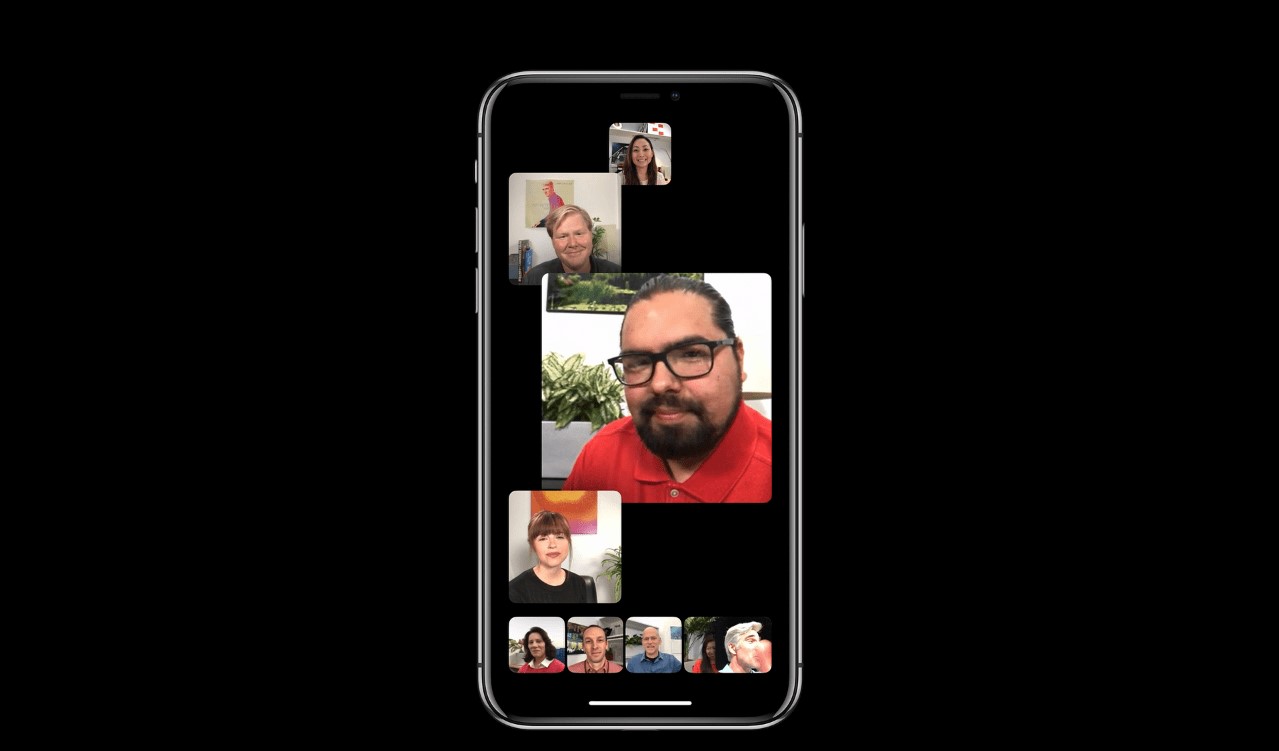 Want to do video-call three people in a group? How about 32? The group calling in the new and improved FaceTime will let you do that, making use of a moving tile display of faces currently in the chat, floating and coming into greater projection when someone begins to talk. Along the bottom of the screen is a scrolling bar of users, letting you choose who takes center stage. Animoji, filters and sticker packs can also be used live.

Want to update your Application to iOS 12 on the first day of launching iOS 12.0? Do get in touch with us, Happy to Help!